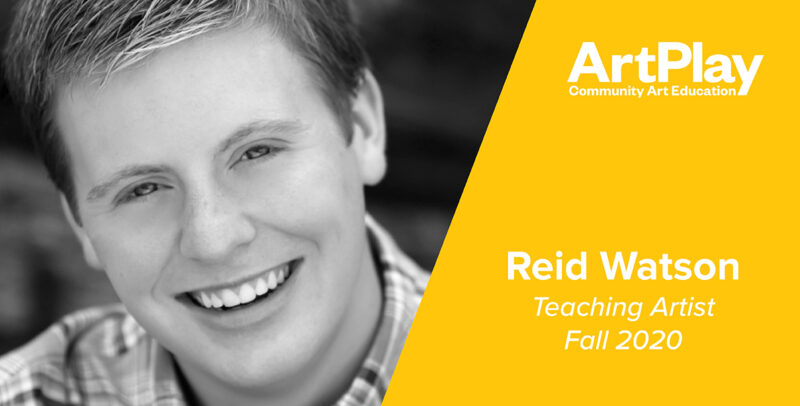 Reid Watson has served as an ArtPlay teaching artist for the past 9 years. He is a proud member of Actors’ Equity Association (A.E.A.) His research areas include directing, musical staging, theatrical intimacy direction, performance pedagogy, and theatre education. Reid teaches Intro to Theatre (TH 114) and Teaching Theatre Performance (TH 245) at The University of Alabama, where he also serves as a resident director for the Department of Theatre and Dance. Reid holds a B.F.A. in Musical Theatre from Syracuse University, and is currently writing the thesis for his M.F.A. in Theatre-Directing. He has also served as the theatre teacher at Pinson Valley High School and The William T. Sherman School (P.S. 87.)

For ArtPlay, Reid has directed and choreographed many shows such as Legally Blonde, Shrek the Musical, Into the Woods, and Xanadu. He co-leads ArtPlay’s A-Team with Heath Mixon. He has directed Hand to God and The River at The University of Alabama; The Drowsy Chaperone and Seussical the musical at Pinson Valley High School; Hello, Dolly and The Jungle Book at The William T. Sherman School (P.S. 87) in New York City. He has also choreographed for Birmingham Children’s Theatre.

His performance credits include the Off-Broadway Revival of Urinetown at the American Theatre of Actors. He has also performed at Maine State Music Theatre, The Gustman/Olympia Theatre in Miami, Fracture Theatre Company, Syracuse Stage, Virginia Samford Theatre, Birmingham Children’s Theatre, Red Mountain Theatre Company, and on television through HBO in Master Class with Patti LuPone. A few of his performance credits include Ragtime, Parade, Sunday in the Park with George, Hairspray, Street Scene, and Big River.

While living in New York City, Reid studied privately with Joan Lader (2016 Tony Award for Excellence in Theatre) in the work of Estill Voice International. He has been recognized through the National Foundation for Advancement in the Arts as a YoungArts Winner in Musical Theatre. He was also recognized through The University of Alabama’s College of Education as a Most Outstanding Student in 2020. Reid Watson has substantial experience of teaching theatre to students of all ages, demographics, and settings. He feels honored to have found an artistic home at ArtPlay. He aims to be approachable, compassionate, inclusive, and encouraging!

Ready to see the classes?

We look forward to virtually seeing you soon!

Receive email and/or print mail from the Center and be the first to know about upcoming presented events and special offers!